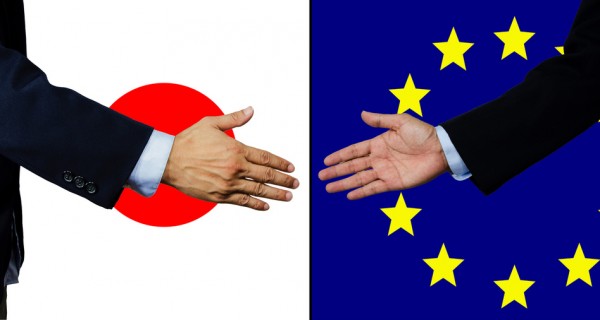 Trading with Japan will become much easier in the future and boost the EU-Japanese trade relations. In December 2017, the European Union and Japan agreed on a comprehensive Economic Partnership Agreement (EPA), which includes a Free Trade Agreement (FTA).
After a negotiation period of four years, the EU and Japan signed the EU-Japan Economic Partnership Agreement (EPA) on July 17, 2018. With this agreement, a large proportion of the products manufactured on both sides will be duty-free between the EU and Japan from 2019 onwards. According to the European Commission, European companies in the areas of pharma-ceuticals, medical devices, agricultural products and food, as well as motor vehicles and transportation, will benefit most from the agreement with Japan, which puts EU companies a big step ahead of their US competitors.As stated by the European Commission, the trade volume could rise significantly because of the removal of trade barriers. The authority expects exports to increase by 20 billion euros. This corresponds to around 280,000 new jobs in Europe. The trade volume between the EU und Japan is expected to increase to approx. 30% of the world’s GDP and nearly 40% of the world’s trade value. This will create the world’s largest free trade zone.
Huge economic benefits will thus arise for the EU and Japan. This new agreement will again show the importance of FTAs to the world in general and especially to those countries opposing to trade agreements in the cause of economic protectionisms.In detail: From 2019, the following new trade facilitations will apply between the EU and Japan
Conclusion:
Schlegel und Partner believe for the new agreement to create a great many of new business opportunities for companies in Europe and Japan. With over 25 years of experience through more than 2,200 successfully completed projects, Schlegel und Partner has gained a profound expertise, maintaining an extensive network with important players in a broad range of industries across the globe, including Japan.Picture: © sunyaluk - Fotolia.com #211337665© Schlegel und Partner 2018
Download: SuP, Japan EU Free Trade Agreement, Aug 2018.pdf, 310694 kB